Posted on January 3, 2013 by The Lost Pedestrian

my favorite moment in new york last week. on the subway. this guy seated next to me reading Essays by Montaigne…. he kept looking over my shoulder as I was pretending to read History of the Thirteen by Balzac, but not really able to focus on it since i was hyper-aware that someone reading Montaigne was looking over my shoulder. finally, he turned to me and asked me if Balzac and Montaigne knew each other. And I tried to explain that one lived in the 19th century while the other didn’t… so it was unlikely they had met. i felt bad for the guy because he was under the impression that i knew what i was talking about.

that and the Ann Hamilton installation at the Armory were the high points of an otherwise disappointing trip. 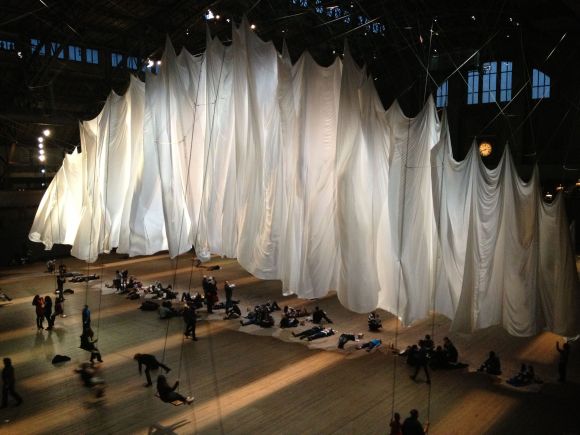 About The Lost Pedestrian

In my wanderings throughout the moments/days/years, I try in earnest to find the mystical within the mundane and the mundane within the mystical, oftentimes confusing one from the other. I have wandered and roamed through many a city, many a town, in a state of wonder and bewilderment, without necessarily going anywhere. I am easily lost, but eventually found. (I am guessing you have just found me). My sincere hope is that you will find Something in this warehouse of thought, memory and false memory, words, numbers, tangents, murmurs, echoes (lots and lots of echoes), voices, dreams, and other paraphernalia.
View all posts by The Lost Pedestrian →
This entry was posted in Uncategorized and tagged Ann Hamilton, Balzac, Montaigne, New York City, Park Avenue Armory, subway. Bookmark the permalink.